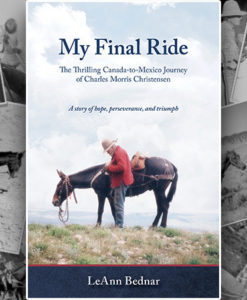 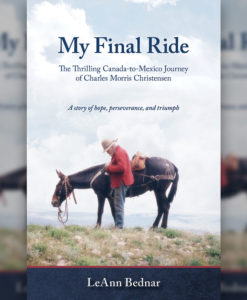 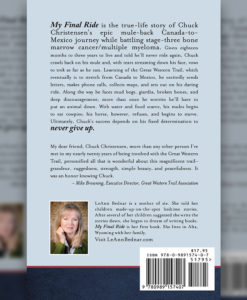 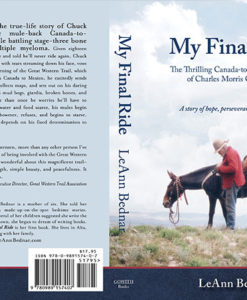 The Thrilling Canada-to-Mexico Journey of Charles Morris Christensen. A story of hope, perseverance, and triumph.

The Book My Final Ride is available in Print (softcover)

My Final Ride is the true-life story of Chuck Christensen’s epic mule-back Canada-to-Mexico journey while battling stage-three bone marrow cancer/multiple myeloma. Given eighteen months to three years to live and told he’ll never ride again, Chuck crawls back on his mule and, with tears streaming down his face, vows to trek as far as he can. Learning of the Great Western Trail, which eventually is to stretch from Canada to Mexico, he excitedly sends letters, makes phone calls, collects maps, and sets out on his daring ride. Along the way he faces mud bogs, giardia, broken bones, and deep discouragement; more than once he worries he’ll have to put an animal down. With water and food scarce, his mules begin to eat cowpies; his horse, however, refuses, and begins to starve. Ultimately, Chuck’s success depends on his fixed determination to never give up.

“You’ll never ride again.” These words pierce Chuck Christensen’s heart. His oncologist explains, “A few of your lower backbones are spotted with holes. One vertebra is disintegrating and collapsing. Your bones are like white Styrofoam in texture and toughness. If you were to get kicked, thrown, bumped or dragged, any of which would cause powdery fractures, there you’d be, in a heap, until someone found you.” Hopeless, after the diagnosis of stage three multiple myeloma, Chuck curls up to await a premature death–eighteen months to three years.

After being reassured by loved ones, who bring him back from the edge of despair, Chuck then turns his attention to the discouraging words of his oncologist. Three months after his diagnosis, radiation, and first chemotherapy, Chuck straps on a clam-shell body brace over his canvas corset. He hopes these precautions will help prevent a broken rib and lessen the chance of a rib popping from loosened muscles that attach his ribs to his sternum. He heads for the barn. What he had never given any thought to before, and was usually completed in seconds, took 30 minutes before he once again sits on his beloved mule’s back. Tears stream down his face. Chuck decides cancer is not going to win. He vows to ride for as far and as long as possible–Canada to Mexico. Chuck believes this ride from border to border will help him come to terms with himself and his cancer. For him, this ride is his very breath of life.

Chuck learns of the planned Great Western Trail (GWT) which is hoped to eventually stretch from Banff Alberta to Montezuma Pass on the Mexican border, more than 2,000 miles. It will go through Arizona, Utah, Idaho, Wyoming, and Montana. Utah and Arizona have proposed GWT on their maps; the other states are still in the thought process with no official GWT mapped. Excited about the idea of the GWT, Chuck sent letters, made phone calls, and collected maps.

Many, including some family members, think Chuck will die in the mountains. His plan is to complete the ride in two sessions, provided his oncologist’s guess of eighteenth months doesn’t come first. The first ride will be from his home in Alta, Wyoming, to Mexico. The second ride will be from Alta, Wyoming to Canada. Chuck is granted a leave of absence from teaching school and heads south, amid family tears.

Friends and family often join him along the way. Other times he rides alone. He stops along the way to receive chemotherapy treatment and get pills to take each month–which often leave him nauseous. Chuck faces mud bogs, giardia, broken bones, and discouragement. Several animals roll down the mountain–Chuck fears for their lives. He worries, more than once, that he will have to put an animal down. Several times Chuck becomes care-giver as those riding with him suffer hypothermia, broken bones and injured knees. Lack of water causes anxiety and becomes a priority. Desperate for food his mules resort to eating cowpies, but his horse just won’t eat them and begins to starve. Chuck’s success depends on his determination to never give up.

Chuck’s faith in mankind is reaffirmed when kind strangers help him along the way. His is a story of hope, persistence and triumph.